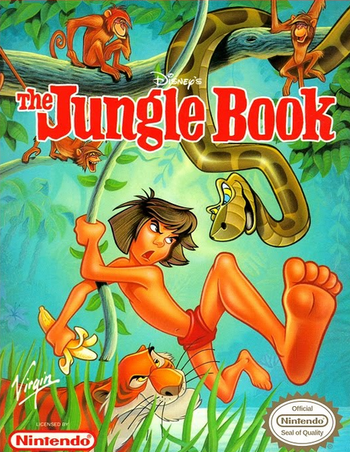 A Platform Game based on Disney's The Jungle Book, released by Virgin Games in 1993 for the Sega Master System. A year later the game was also released for the NES, Sega Genesis/Mega Drive, Sega Game Gear, Super NES, and PC. The NES version is notable for being the final third party NES game released in the US (PAL regions got a version of The Lion King, but the less said about it the better). In 2003 a remake for the Game Boy Advance followed. Although all versions are in large ways the same, there are some noticeable differences between them, like level designs.
Advertisement:

The player controls Mowgli, a young boy who has been raised by wolves. Mowgli must leave his home in the jungle and go back to the human village because Shere Khan, a tiger, is now hunting him. Mowgli must fight jungle wildlife and ultimately Shere Khan himself to reach his village. During the journey he meets Bagheera, Baloo, King Louie, the hypnotist snake Kaa, as well as the evil Shere Khan.