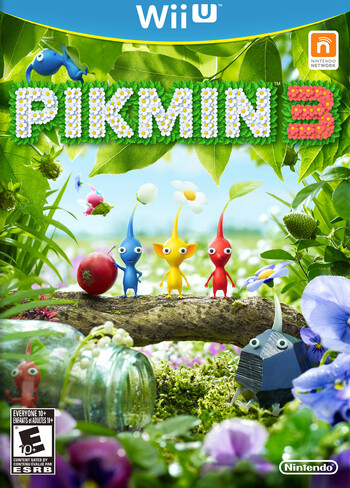 Pikmin 3 is the third installment in the Pikmin series, released for the Wii U. Its existence was revealed at E3 2011, following nine years of near-total silence since the release of Pikmin 2. Gameplay was first shown at E3 2012, and the game was launched on July 13th, 2013 in Japan, followed by releases on July 26th in Europe, July 27th in Australia, and August 4th in North America.

Breaking the tradition set by the first two games, the player does not step into the shoes of Captain Olimar this time around, but rather three new pilots from the planet Koppai: Alph, Brittany, and Charlie. Their planet is suffering a massive food shortage, and in a desperate attempt at salvation the three fly to the Pikmin planet (which they dub PNF-404) to collect fruit seeds to cultivate back home. However, an accident before landing scatters the trio and their Cosmic Drive Key, a component critical for getting back home, across the wild surface of the planet. The three pilots, with the help of the Pikmin, must reunite, recover the drive key, and gather enough fruit to save their race from extinction while dealing with a familiar pair of explorers that also seem to have business on the planet...

Pikmin 3 introduces a system where the GamePad can be used to have a quick look-around of the map, alongside a "go here" feature that can be used to have captains automatically head to a specific location, making multitasking easier and more efficient. While the Pikmin varieties introduced in the previous game don't return in the game's main storyline (although White and Purple Pikmin appear in certain DLC missions), two new variants are introduced — Rock Pikmin, who can shatter hard obstacles and deal increased damage when thrown but which can't cling to enemies, and Winged Pikmin, who deal very little damage to enemies but whose flight allows them to safely move above enemies, obstacles and hazards.

A number of DLC packs were released for the game, consisting chiefly of collections of one-short mission scenarios. The Collect Treasure pack, released on October 1, 2013, added four stages themed around collecting large quantities of items. The Battle Enemies pack, released on November 6, 2013, instead has four stages focused on killing monsters. A third DLC, released on December 2, 2013, adds eight new stages (the previous DLC remixed preexisting ones instead), four being Collect Treasure missions and four being Battle Enemies ones. A port for the Nintendo Switch, titled Pikmin 3 Deluxe, was released on October 30, 2020 and developed by Eighting. The port incorporates all DLC from the Wii U version and adds a number of features to the base game — a prologue and epilogue starring Olimar and Louie, selectable difficulty modes, cooperative play, and the return of the Piklopedia from Pikmin 2.