Only the Leads Get a Happy Ending 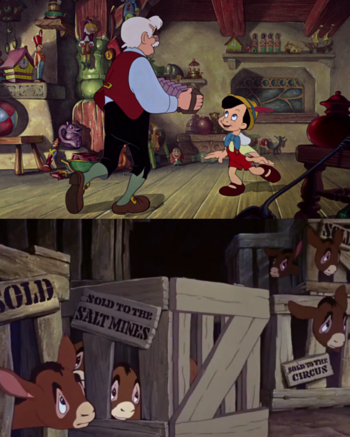 Remember kids, only the lead can Become a Real Boy. The rest become donkeys.
Fox News Commentator: You had the two animals walking in side-by-side, and then you had the rainbow, and the dove comes, and then the sun comes out, and everyone lives happily ever after.
Jon Stewart: EVERYBODY?
— The Daily Show, "Haters of the Lost Ark"

The story ends on a happy, upbeat note, with all the problems resolved and everyone getting back to leading happy, fulfilling lives ... but only if they're main characters. The characters the audience know and care about get their happy ending, but it comes at the expense of minor characters who get stuck with a Downer Ending.

Note that the term "minor characters" does not include villains, even of the Mook variety, since we expect them to wind up worse off in the end (and it is considered more shocking if they get away, are Easily Forgiven, or win).

Related to Protagonist-Centered Morality, Inferred Holocaust, Esoteric Happy Ending, Everybody's Dead, Dave, and Dwindling Party. If an Adam and Eve Plot is both apocalyptic and presented as having an upbeat ending, it's also this.

See also: What Happened to the Mouse?, where minor characters are forgotten about entirely.