Literature / Slaves of the Abyss 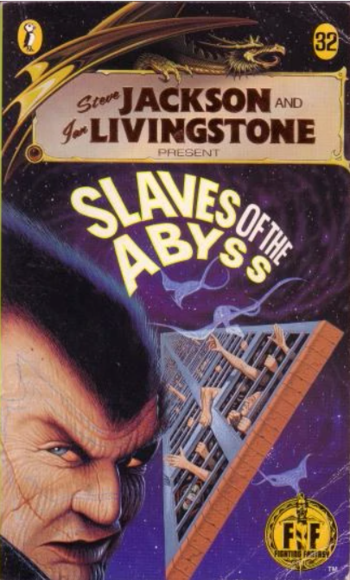 If you stare into the abyss, the abyss stares back at you...
Advertisement:

Slaves of the Abyss is the 32nd entry of the Fighting Fantasy series of Gamebooks, written by Paul Mason and Steve Williams.

The city of Kallamehr is under siege. Its army is away facing invading forces, but the danger is far greater than any members of the Royal Family of Kallamehr can anticipate. Defenseless and facing a new threat of possible supernatural origin, the noble Lady Carolina of Kallamehr summons a band of warriors and adventurers, including YOU.

You are a warrior wielding a sword crafted from Fangthane steel, an experienced adventurer, veteran warrior and seasoned traveler who have traveled through the seas and deserts outside Kallamehr. The world outside is your home, a sky of stars is a roof over your head, and you spend your days wandering the lands with your trust being your sword. For you, every quest, every battle, is just a way of life for you, and the battle for freedom of Kallamehr, to you, is just another adventure for you to participate in. Little do you know, it will be a literally life-changing quest...

You arrive just as Kallamehr is preparing for war with Bei-Han. The city is deserted; warriors, heroes, knights and mercenaries employed by Lady Carolina have amassed around the city gates, but will that be enough to save Kallamehr?

Will you manage to preserve this stronghold of Good against the invading hordes? Or is this task beyond even your heroic abilities? You will need your wits as well as your sword of Fangthane steel to prevent the sands of time engulfing the city ...

The Fighting Fantasy series will return to Kallamehr for one last time in Magehunter.

Slaves of the Abyss provides examples of: