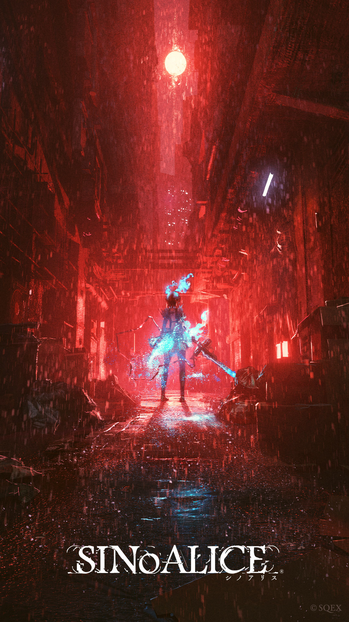 Ever after ends now
A Tale of Terror
Welcome to the Worst Tale
— The game's Tagline, in English and Japanese respectively.
Advertisement:

SINoALICE is a free-to-play mobile game developed by Pokelabo and published by Square Enix, released on June 6, 2017 for Android and iOS platforms.

In a world called Library filled with countless stories, the Characters within each story wish to revive their author for their desired future. To do so, they work together to gather Lifeforce and fight the Nightmares that devour stories, knowing they will inevitably have to kill each other to get their wish.

Notably Yoko Taro, known for his work on the Drakengard franchise and its spinoff series NieR, is the writer and creative director of this game, though there is no apparent connection between this game and his other works besides the crossover collaboration events held for this game.

About the same time as the Taiwanese announcement, a global release was announced by Gree. Initially supposed to be published by Nexon for a July 18, 2019 release, after 6 months of delays Pokelabo announced on March 23rd, 2020 that global publishing will be handled by themselves with a July 1, 2020 release.

On June 10, 2020 preregistration for the Simplified Chinese version of SINoALICE for mainland China had begun, with publishing being handled by Bilibili Games.

The August 2020 Live SINoALICE livestream had Shogo Maeda announce a cross-server World GranColosseum event in which players from different servers would be pitted against each other. It was so far held twice; once on November 2021 and another on October 2022. Both editions were won by LiLLion! from the Japanese server.

The game also has the following side materials:

Beware of spoilers from the Japanese and Taiwanese versions.