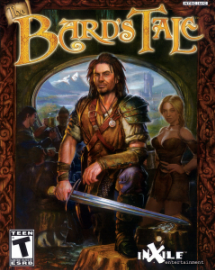 "A quest for coin and cleavage."
Advertisement:

Take your standard Heroic Fantasy, except replace that hero with an Anti-Hero Jerkass, "a sardonic and opportunistic musician and adventurer, driven by carnal rather than noble pursuits". The Bard (who is never identified by a specific name) is not interested in saving the world, his humble motivations being strictly "coin and cleavage". Then have his quest narrated by a mocking, biased man who cannot stand him.

The Bard, after getting burned by and subsequently slaying a giant, fire-breathing rat, ends up being recruited by an old man to help free a princess named Caleigh. As a result of this, the Bard finds himself being attacked by an assortment of fanatics from a Druid-like cult, sent to dispatch him by a being called Fionnaoch. On the way to complete his quest, the not so valiant anti-hero will have to overcome the truly terrifying challenges of three monstrous guardians, break-dancing corpses, spontaneously melodious goblins and a giant, fire-breathing rat.