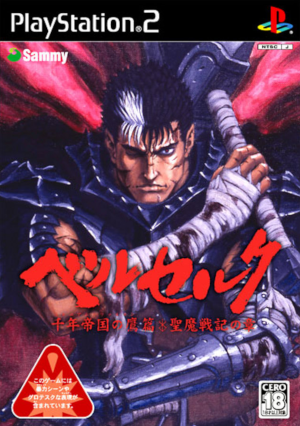 He's a monster who eats other monsters.
Advertisement:

Berserk: Millennium Falcon Hen Seima Senki no Shō (Berserk: Millennium Falcon Arc - Chapter of the Holy Demon War) is the 2004 PlayStation 2 sequel to the 1999 Sega Dreamcast video game Sword of the Berserk: Guts' Rage, making it the second Licensed Game created by Japanese developer Yuke's as part of the Berserk franchise. In terms of story timeline it picks up directly where the previous game left off and adapts the Chapter of the Holy Demon War, which occupies volumes 22-27 of the original manga.

LATE-ARRIVAL SPOILERS: This works page and summary contains Late Arrival Spoilers for Berserk if you haven't read up to volume 27 of the manga. Read it at your own risk, and turn back now if you aren't ready!

At the start of the Millennium Falcon Arc, our BFS-wielding Anti-Hero Guts has rescued his beloved Casca from the Tower of Conviction and vowed to never abandon her again. Despite this achievement, he is forced to face the fact that he himself can do nothing to help her recover her lost personality or memories, and that no place is safe for them because their Brands of Sacrifice attract demons at night. An encounter with Griffith on the Hill of Swords leaves Guts conflicted between pursuing his hated enemy and his resolve to escort Casca to safety, while underscoring that his struggle has only just begun. Seeking shelter from the snow, Guts enters with Casca and his Fairy Companion Puck into a stately abandoned mansion, where he encounters a Creepy Child named Charles. Cursing Guts for intruding into his world, Charles summons apparitions of the dead members of the Band of the Hawk, who accuse Guts of betraying Griffith and call his quest to avenge them wrong. Guts fights them off and leaves the mansion, which turns out to have been a bewitched ruin, but he hasn't seen the last of Charles or the ghosts of his past.

Puck suggests a journey to his magical homeland of Elfhelm where the branded two may find respite and perhaps a cure for Casca's condition, but that's easier said than done. With the strain of defending both himself and Casca night after night, and with the evil side of his personality, the Beast of Darkness, urging him to kill her so that he can devote himself to revenge on Griffith, Guts is about to break. Then, in his moment of weakness, help arrives in the form of three unlikely followers: Farnese, a noblewoman and repentant former Knight Templar; Serpico, her Servile Snarker manservant and bodyguard; and Isidro, a hot-heated Artful Dodger who dreams of becoming a Master Swordsman.

In the woods near Enoch village they meet the witch Flora, who offers to help Guts and his companions in exchange for helping her precociously gifted apprentice Schierke to save the village from rampaging trolls. On this mission, Guts is challenged to master the personalities and skills of his fractious party, and to defeat the monsters in his path without becoming an even bigger monster. And when he faces Charles again in the depths of Qliphoth, he may have to fight a version of Casca who doesn't want to be cured!

Seima Senki no Sho introduces higher quality graphics and larger levels compared to Sword of the Berserk, while refining its Hack and Slash gameplay against hordes of Mooks and tough bosses. Guts fights mainly using his Dragon Slayer, enabling the player to control the sword's trajectory for vertical, diagonal, and horizontal strikes. Combat moves include a basic attack, a strong attack which can be used as a finishing move, a block that serves as a counter when timed correctly, and a dash that can be combined with sword strokes. Guts' Super Mode is charged up by dealing and soaking up damage, and lets him go berserk on the enemy for a short time. The player also has access to Guts' arsenal, including the repeating crossbow, bombs, throwing knives, and the Arm Cannon. The most significant addition is the companion wheel, which enables Guts to use the abilities of his companions. Puck provides healing dust, Serpico freezes time, Isidro produces flame with his fire dagger, and Schierke casts defensive magic on Guts. Meanwhile, Guts collects experience points by killing monsters and by capturing little treasure guardians called Spriggans, which he can use to level up his abilities and party members.

Sadly for international Berserk fans, Seima Senki no Sho was only released in Japan and Korea, meaning that most gamers outside those countries can only play it on emulator using a translation patch. On the plus side, the game features voice acting by the original 1997 anime cast and has an original score by Susumu Hirasawa. The story unfolds through a combination of in-engine dialog and pre-rendered cinematic cut scenes.

Despite the Millennium Falcon reference in the title, this game has no association with the Star Wars franchise.