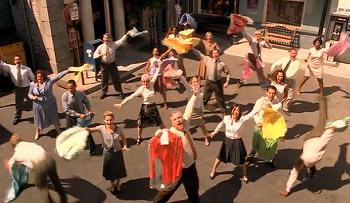 "THEY GOT!
THE MUSTARD!
OUT!" note No, it's not just us.
Rocko: Why was everyone singing?
Heffer: We just got a song in our hearts!
Rocko: How is it you all know the words? Did you rehearse?
Heffer: Yeah, every Thursday. Didn't you see the flyers?
— Rocko's Modern Life, "Zanzibar"
Advertisement:

Any time a large group of people need to sing a song in unison, two things are inevitable: One, everyone always knows all the words; two, no one is ever off-key or out of sync. In other words, no matter how spontaneous the moment is supposed to be, they sound like they rehearsed the song.

In the world of storytelling, there are untold legions of men, women and children ready to burst into song at a moments notice, they only need a nice main character or two to inspire them. Lyrics? Got em memorized. Tricky singing pieces? Not a problem. Choreography? Goes off without a hitch. Every single time.

Naturally, this grows directly out of musical theater, where it's understood that all these people aren't REALLY bursting into song—they're merely acting as the Greek Chorus for the lead characters. For that matter, since the actual Chorus in many Greek tragedies speaks for the general public within the play, versions of this are Older Than Feudalism.

TV shows will sometimes make an entire Musical Episode out of this trope. Obviously, Musicals will have these all the way through.

Compare Crowd Chant. Often overlaps with Audience Participation Song. Made possible by Spontaneous Choreography. Taken to the extreme, it's because the lead cast Summon Backup Dancers. See also Sound Off where a military group uses a song or chant to keep everybody in time. If the song's about the crowd coming together as a mob it's an Angry Mob Song.

Bizarrely, this is edging its way into Truth in Television with the phenomenon known as a "flash mob," where the performers gather at a prearranged time and place and then assemble as if stepping from the crowd, giving the illusion of spontaneity. Here's an example.

This part of "96000" features overhead shots of the swimmers making circular movements as well as shots of the crowd.

This part of "96000" features overhead shots of the swimmers making circular movements as well as shots of the crowd.