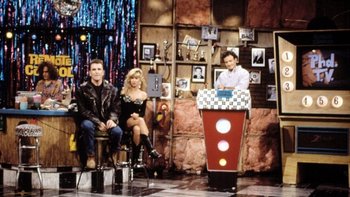 Steve, Colin, Kari and Ken in the basement.
"It's his basement! It's his rules! It's his game show!"
— Colin Quinn, introducing host Ken Ober
Advertisement:

Game Show about TV trivia that was MTV's first venture out of music videos (and thus the very beginning of Network Decay to some). The premise was that host Ken Ober grew up addicted to game shows and longed to host his own, so he set one up in his basement and bombarded contestants that dared to enter with questions about television, junk food, and threats to their well-being. The supporting cast was shockingly good for a low-budget cable show of the era and featured Adam Sandler and Colin Quinn before they made it to Saturday Night Live; Denis Leary before he developed Rescue Me; actresses Marisol Massey, Kari Wührer and Alicia Coppola, who have worked consistently in film and TV since then; and future TV writer Rick Rosner.

Contestants played by selecting one of nine channels on the "Big Zenith", each of which represented a category; Ober would then ask questions related to that category for increasing amounts of points. Of course, some of the channels were less pleasant than others: "Ranger Bob" and "Home Shopping Zone" took away points, and others such as "Wheel of Torture" and "Beat the Bishop" required the contestant to complete (or endure) a challenge to earn the points.

Losers were ceremoniously thrown "Off the Air" and yanked through the back wall while still in their chairs. This part was copied from the 1975 Musical Chairs, albeit in a much more violent manner.

The show originally aired from December 7, 1987 until December 13, 1990, with a concurrent syndicated version running for the 1989-90 season. Two episodes (one each from the first and last seasons) were aired by MTVnote (2 in the wee hours of the morning) in tribute after Ober's death in late 2009.

"It's his basement, it's his tropes, it's his game show":