Literature / How Much for Just the Planet? 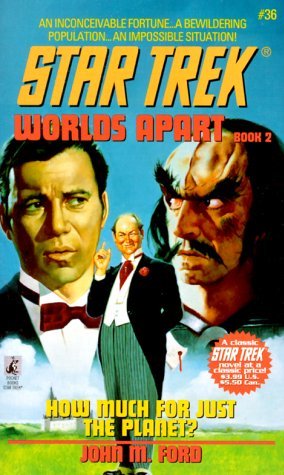 How Much for Just the Planet? is a novel in the Star Trek Expanded Universe, written by John M. Ford.
Advertisement:

After large quantities of dilithium are detected on the planet Direidi, the Federation and the Klingon Empire each send a delegation to persuade the planet's inhabitants (independent human colonists) to grant them mining rights. The starship Enterprise draws the duty of transporting the Federation's diplomat.

The Direidians are eccentric, to say the least — if "eccentric" is a strong enough word to describe a population given to sudden outbursts of crowd songs — and very little about the visit goes according to plan. Captain Kirk is enlisted in a Zany Scheme to reunite two starcrossed lovers. Uhura finds herself on the run with her Klingon counterpart. McCoy and Sulu, on an expedition to examine the dilithium deposits, are captured by barbarian tribesmen. Scotty faces a Klingon on the field of honour (i.e., the golf course). Events build to an action-packed climax before the identity and purpose of the forces working behind the scenes are finally revealed.

It's a comedy, in case that hadn't become apparent. Blue orange juice, inflatable starships, and milkshake-obsessed ship computers are not exactly the stuff of serious drama, after all.