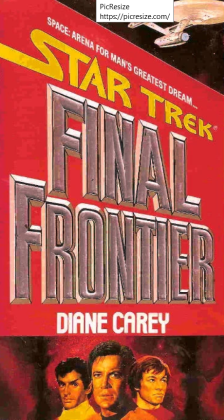 Final Frontier note not to be confused with Star Trek V: The Final Frontier is a Star Trek Expanded Universe novel by Diane Carey, published in 1988. It was the third in Pocket Books's series of so-called ‘Giant’ Star Trek novels.
Advertisement:

Taking some much-needed leave following the events of "The City on the Edge of Forever", James Kirk has returned to his childhood home on Earth in order to reevaluate his life. Reading through a cache of old letters from his father, he perceives echoes of the same existential questions troubling him now, amid hints of a top-secret mission that his father once undertook...

Twenty-five years ago, Starfleet security officer Commander George Samuel Kirk finds himself unexpectedly recruited by old friend Captain Robert April. The mission: rescue a damaged passenger liner, which is stranded by a deadly ion storm and due to run out of supplies and life support before conventional aid can reach them. The method: use the top-secret prototype of a brand new class of starship—the revolutionary Constitution Class—which has the power and advanced technology to make it through the ion storm and reach the liner in time.

If successful, this new breed of starship could become a symbol of achievement and exploration, something to unite and inspire the different worlds of the Federation. But, as George points out, they could also be seen as powerful weapons of war. Hence, April maintains, a humanitarian rescue mission is the ideal way to introduce them to the public.

And so, with a skeleton crew mainly consisting of technicians and engineers, the unnamed and unfinished starship sets off on a mission to make history. But history has other ideas... and a combination of bad luck and deliberate sabotage quickly threaten to transform their dream into a nightmare of destruction and war...