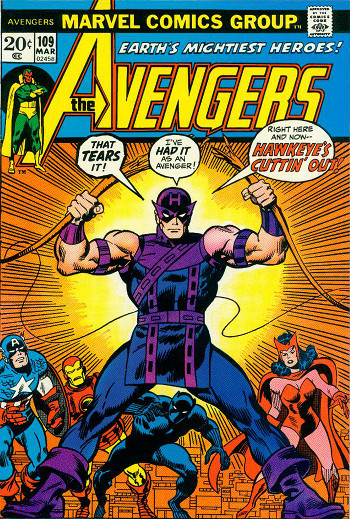 That lasted all of 63 issues.

◊note Although it did take five non-comic book years until he got back.
"Really? I retired for, what, five minutes, and it all goes to shit."
— Hawkeye, Captain America: Civil War
Advertisement:

In the middle of a crisis, calamity, or sheer unadulterated apocalypse, something terrible happens (but not, typically, any more terrible than happens in any given episode) and The Hero completely and utterly gives up. Common lines that go with the phenomenon are "I'm too old for this," "I can't do it," "There is nothing I can do," "The best thing to do is to get out of here," or "Somebody else can." May even be the follow-up to a Heroic BSoD, which is similar but involuntary.

After some kind of epiphany, often accompanied by a "No More Holding Back" Speech, the character comes out of retirement and announces that they are back on the job, typically followed by the show's equivalent of a Foe-Tossing Charge — anything from actual foe-tossing to kicking butt in the school spelling bee. (See also Look What I Can Do Now!, which is similar but involves a character leaving and returning much badder than before.)

It's also a common Romantic Comedy trope to have one of the principal couple suddenly decide to quit working with or for the other, vowing to never come back, only to return a few scenes later.

See also: Achilles in His Tent, Conscience Makes You Go Back, Changed My Mind, Kid, and We Used to Be Friends. Opposite of Passing the Torch, where The Hero seriously hands on the responsibility to someone else. He's Back! is what happens when the character returns to action. Breaking the Fellowship is the equivalent for a whole group rather than a mere individual.

open/close all folders
Anime and Manga
Comic Books
Fan Works
Films — Animated
Films — Live-Action
Literature
Live-Action TV
Professional Wrestling
This trope is almost cliché in Professional Wrestling. Very few wrestlers have successfully retired for goodnote The only times that retirement usually sticks is if the wrestler either never made it past lowercard level, or sustained some type of injury or condition that either prevents them from stepping back into the ring or will paralyze/kill them if they try and even most of the ones who have will still stick around as commentators, referees, bookers, trainers or ambassadors.
Theatre
Video Games
Webcomics
Web Original
Western Animation
Real Life
Feedback