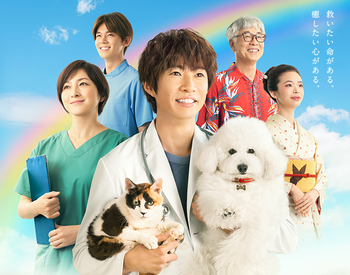 While humans have to deal with Dr. Jerk and suffer under the Depraved Dentist, animals are often much luckier. When the beloved Team Pet gets ill or kicked, his owners will waste no time getting him to a veterinarian who will go the extra mile to make sure that your little dog comes out A-okay. When not a Friend to All Living Things, even a vet cast as frightening (usually from the animal's point of view) turns out to be just doing his job. In other times, animals in fiction have this uncanny ability to understand that this human is trying to help them, not that they appreciate getting shots in any case.
Advertisement:

Not to be confused with kindly war veterans.