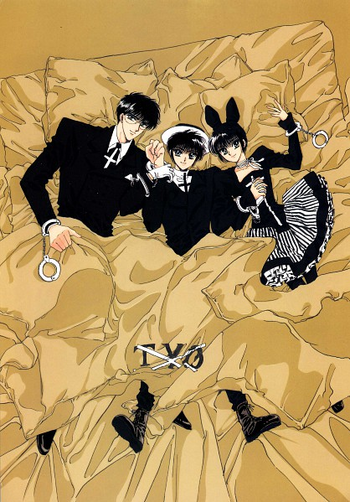 Where else on earth do so many people enjoy their descent into destruction?
"Do you love Tokyo?"
Advertisement:

Tokyo Babylon is a dark shoujo manga series by CLAMP, which was serialized in Wings from 1990 to 1993 and compiled into seven volumes. It had two OVA movie adaptations, both independent of the manga, and one Live-Action Adaptation which takes place some years after the manga's events. A new anime adaptation is being planned. It was originally produced by GoHands for an April 2021 premiere, but production was shuttered in March 2021 after reports of plagiarism issues on the costume designs and the lack of trust in the studio. CLAMP and Kadokawa announced plans to continue the project with a new production committee where they have to restart from scratch.

The year is 1990. The city is Tokyo, a busy megalopolis where people are caught in dreams, anonymity, loneliness, sadness and crushed hopes underneath the fevered rush for success and wealth.

Sometimes the high-pitched emotions and acute despair manifest themselves into ghosts and curses. Enter Sumeragi Subaru, 13th head of the Sumeragi clan and a 16-year-old onmyouji. He uses his spiritual power and genuine compassion to help people, exorcise trapped spirits and undo maledictions. In this modern world, where nothing is truly black and white, this is hardly easy, especially because of Subaru's tendency to care too much for people.

His twin sister Hokuto is there to help him, to cheer him up, and to make him wear eccentrically fashionable clothing. Sakurazuka Seishirou is a (male) 25-year-old gentle veterinarian friend of the twins, who professes to love Subaru. Hokuto thinks that making them a couple would be a marvelous idea, even though - or maybe because - she believes that Seishirou is the mysterious Sakurazukamori, an assassin onmyouji said to protect Japan from the shadows.

CLAMP's personal pastiche of the popular occult mange genre from The '80s, Tokyo Babylon mixes a mood of upbeat cheerfulness with dark social commentary and a deceptively naive tone. It acts as a prequel of sorts to X/1999, where the characters of Subaru, Seishirou, and Hokuto are featured again and reveal their last secrets.