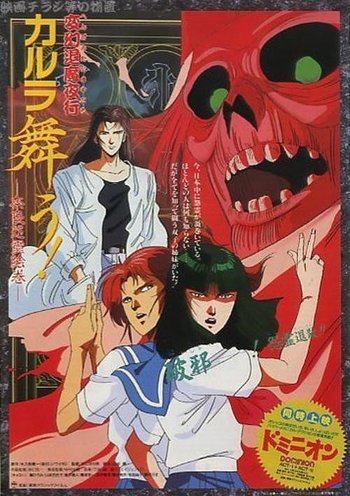 Karura Mau! (Karura Dance!) is an occult/horror manga series from The '80s, penned and drawn by Kiichi Nagakubo. One of the main titles in its genre back at its day, it is also a notably long franchise, having started its publishing in 1986 and still running in the form of spinoffs and sequels.
Advertisement:

Twin sisters Shoko and Maiko Ohgi could not be more different: the former is dark-haired and brainy, while the latter is a redhead hustler. However, they share the common fate of being the current heir of the Ohgi family, a clan of Onmyōdō exorcists that has protected Japan since generations. Secretly backed by the Japanese government and helped by a descendant of Abe no Seimei, among other weird and varied allies, the sisters combine the powers conceded by their guardian deity Karura to banish evil.

The first volume was adapted into a theatrical animated film with some input from Toei Animation, while the second received a less known six episode OVA series.