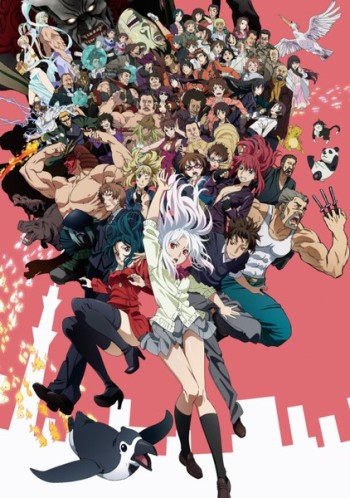 Urushiba Rinka is having a strange day.

She was an ordinary girl with an ordinary life, until a flying penguin and a swarm of glowing fish swimming through the air changed everything. Rinka soon finds that she is involuntarily moving through things, walls, the floor of her apartment... and her clothes.

And she is not the only one who changed. A strange boy name Kyoutaro Azuma can teleport, her father can move things with his mind... and any number of petty criminals are using this so-called "ESP" to run wild.

Azuma is using his abilities to become a superhero, albeit with mixed success, and he wants Rinka to join him...

Tokyo ESP began as a manga from Hajime Segawa, the author of Ga-Rei. An anime adaptation began airing on 11 July 2014. It's been licensed in the US and Canada by Funimation, and Crunchyroll is streaming it in much of the world.

It also has a tie-in novel called London ESP, that can easily be accessed through a simple search. It details the misadventures of two of the more important characters and contains heavy spoilers in regards to Part 1 of Tokyo ESP, so we highly recommend you wait to read it.