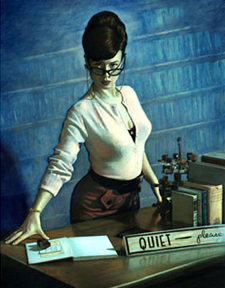 Librarians give great subtext, if you catch my drift.
Booth: All right, what I want you to do is take off your glasses, shake out your hair, and say, "Mr. Booth, do you know what the penalty is for an overdue book?"
Brennan: Why?
Booth: ...Never mind.
— Bones, "The Passenger in the Oven"
Advertisement:

A very attractive but prim and prudish woman, who would be gorgeous if she would just take off the glasses (or not), let down her hair, and unbutton her top button. However, they tend to prefer more intellectual pursuits. Sometime during the course of the season, the character will be forced to do all of these things to solve some sort of problem involving a lecherous man, but will always manage to escape the situation without sex.

Contrast Scary Librarian and Evil Librarians (though they can overlap), see also Beautiful All Along. Compare Magic Librarian, which is more likely to overlap. (Sometimes, all three may overlap.) Compare Teacher/Student Romance. Note that the character doesn't actually have to be employed as a librarian to fit this trope, as long as they fit the physical description (glasses, skirt, hair in a bun, etc.) and share the same character traits (nerdy, shy and sexy). Females usually include glasses (because librarians are supposed to be smart, and Smart People Wear Glasses). This is also common among school teachers, especially in Westerns and Historicals.

Please note that this applies to a character, not simply any hot actor playing a librarian, for the same reason Real Life examples are not listed here. Most actors are "hot" in the first place, so it usually goes unsaid. You can have an attractive librarian without their hotness being a plot element in the work - that would not fall under "Hot Librarian".

Compare Cute Bookworm for shy, sweet characters that like to read a lot.