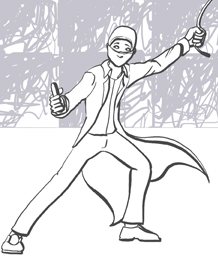 He's some sort of ninja. A well-dressed ninja.
"You're not gonna help us?"
"Nah... warehouse doesn't have an access ramp."
"Wow, that... is a huge oversight."
— The Armeniman and El Chupacabre
Advertisement:

Goodwill Heroes was a webcomic that details the adventures and exploits of the Goodwill Heroes as they attempt to fight crime using a variety of non-standard methods. It updates every Monday and officially began in April '11. They are currently on the second chapter of the first book, Second-String Superheroes.

The always-increasing cast of characters includes, so far:

The comic vanished from the internet some time after January 2012 and no archive has been found.

This comic provided examples of: