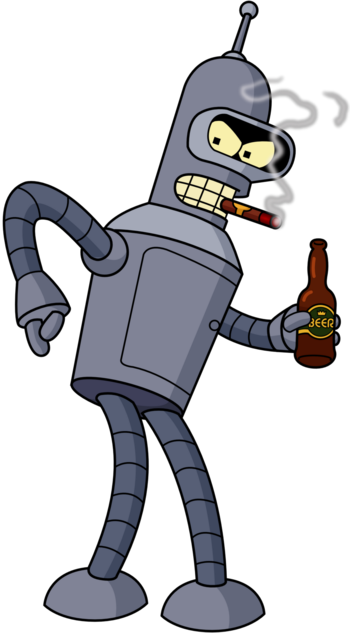 He's made of metal; he can't help being a hardass. But please, don't be Bender. "Bite my shiny metal 4$$!"
"I'm Mr. Bad Example, intruder in the dirt
I like to have a good time, and I don't care who gets hurt
I'm Mr. Bad Example, take a look at me
I'll live to be a hundred, and go down in infamy!"
— Warren Zevon
Advertisement:

A type of "bad" character generally geared towards children and what the executives view as moronic viewers. It is used to dissuade children from smoking, get them to eat a healthy diet of fruits and vegetables while avoiding foods containing fat, cholesterol, sugar, and caffeine, or to convince them not to use drugs. Other Aesops may also be delivered through this method.

How it works is that the character who partakes in the undesirable behavior is portrayed as being rude, crude, possibly ugly, bullying, obnoxious, antisocial, stupid, foolish, misguided, shallow, arrogant, or any combination of these traits. For example, teens who use drugs might be portrayed as juvenile delinquents with no redeeming qualities whatsoever. These characters are almost always one-dimensional, with their portrayals Accentuating the Negative as much as possible. It's nearly impossible to identify with these characters even if you yourself partake in the undesirable behavior. Back in the late 1980s/early 1990s, these juvenile delinquents and gang members might be shown wearing leather jackets, though this stereotype is no longer used since law abiding citizens are now allowed to wear leather jackets as well and it no longer carries the bad boy image that it once did.

The kids who avoid the undesirable behavior are portrayed as innocent, happy, cool, highly intelligent, full of life, and with a healthy level of self-esteem, always being nice and respectful toward each other and everyone else, and having a really good time playing by the rules.

When your own government is presenting you with this character, it's almost always as a part of a Public Service Announcement. May overlap with Scare 'Em Straight when the rule-breaking rebels are scary.

When Moral Guardians can't wrap their minds around even this Anvilicious method of delivery, you get But Not Too Evil.

Making the Anti-Role Model too charismatic can have some problems though, such as Do Not Do This Cool Thing, Evil Is Cool, Evil Is Sexy, and even Draco in Leather Pants.

Compare with Hitler Ate Sugar, when everything a bad person does is fallaciously assumed to be bad. Sister Trope to Deliberately Bad Example, where the character is less of a cautionary tale for the audience and more of a plot device to establish the hero's actions as reasonable by contrast. See also Anti-Mentor, when the character is a teacher in-story.

Contrast The Paragon. Compare and contrast What Would X Do? — we're meant to consider what an Anti-Role Model would do and then go do the opposite of that. The Complainer Is Always Wrong is a subtype of this.

Emily portrays how NOT to be vegan.

Emily portrays how NOT to be vegan.