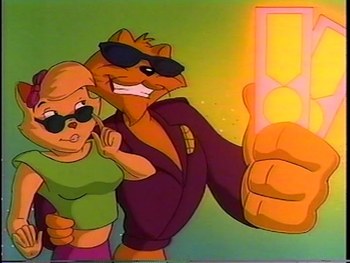 Front Row Joe was an anthropomorphic cat who served as the mascot for the Cinemark theater chain from 1988-1997 (with a return from 2004-2009). He appeared in various policy trailers for the theater during this time to teach the audience good movie-going etiquette. His trailers would also feature troublemaker Clyde and his friend Elton, who would demonstrate what not to do at the movies (though Elton would later make a Heel–Face Turn), and later added a love interest, Popcorn Penny. The trailers, produced mostly by Willming-Reams Animation of San Antonio, TX, were known for conveying their messages through catchy songs, and are seen by a lot of people as one of the sets of policy trailers that had the most effort put into them. A compilation of most of the 1988-1997 trailers can be seen here

While Joe no longer appears in Cinemark policy trailers, he IS still seen on some of their print advertising, and as a mascot at promotional events as seen here

. Additionally, the character does apparently still serve as the mascot of Cinemark in Spain.

courtesy of artist Denis Zilber. While so far, he only appears on print advertising, the fact that Cinemark was willing to redesign their old mascot after all these years indicates that maybe they have some new plans ready for him.

These trailers contain the following tropes: