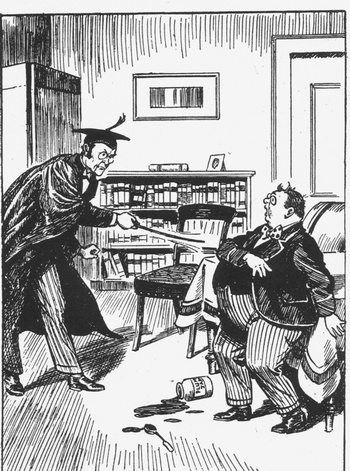 Bend over that chair, Bunter! note Stealing jam, then hiding in your form-master's study to eat it just might get you in trouble.
"Bunter ... is a real creation. His tight trousers against which boots and canes are constantly thudding, his astuteness in search of food, his postal order which never turns up, have made him famous wherever the Union Jack waves."
— George Orwell
Advertisement:

The Greyfriars school stories ran for thirty years in the boy's weekly paper "The Magnet" and, after that ceased publication during the war, continued as a series of novels. The stories were credited to 'Frank Richards', but were almost all the work of a single and astonishingly productive man, Charles Hamilton, who also wrote under other names for several other story papers.

The stories documented the trials and tribulations of the Remove form, particularly the straight-laced, high-spirited, sporting "Famous Five" (no, not that one) of Wharton, Nugent, Huree Jamset Ram Singh, Bob Cherry and Johnny Bull. However they were rapidly eclipsed in popularity by their greedy, short-sighted, pathologically self-centred classmate, Billy Bunter, who took on the title role in the novels, and later television, stage and comic adaptations. Already rather far removed and outdated from the reality of boarding school life at their inception, the students, school, slang and storytelling remained pretty much unaltered during the 50+ years that the series ran.

Although Bunter's depiction varied wildly once other authors tried to write stories about him, the original author always allowed Bunter some saving graces to prevent him from becoming totally unlikeable. So, although Bunter was greedy and would steal food from almost anyone who he knew wouldn't report him to the police, and was a pathological liar, nevertheless he would never deliberately steal anyone's money (asking for a "loan" wasn't stealing, to Bunter's mind), and although usually depicted as a coward, Bunter did have a spot of courage which he could draw upon when the plot demanded he do so.

Bunter at his most exaggerated lived on alone after Greyfriars in a comic strip in Knockout from 1939 onwards.