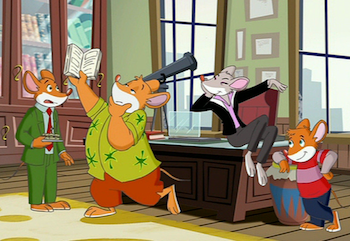 Geronimo Stilton is a children's chapter book series, created by Elisabetta Dami and originally written and published in Italy, that stars the titular hero, Geronimo Stilton, a mild-mannered and (seemingly) cowardly mouse who works as a famouse journalist (specifically editor and publisher) for The Rodent's Gazette, the most popular newspaper in New Mouse City.

Even though he just wants a quiet life, he can't stop himself from ending up on many different kinds of adventures, ranging from catching master thieves to searching for sunken treasure to racing across America to participating in cooking competitions. He is often accompanied by his sassy sister Thea, his boorish cousin Trap, and his favorite nephew Benjamin.

All of the books are written by Geronimo in first person, detailing all of his thoughts and experiences about the crazy things that come to his doorstep. The illustrations are all in full color and Rainbow Speak in the form of funky fonts is used liberally ala Bold Inflation.

The books have been successful enough to spawn many Spin-Off series, with the following list being of the ones published in English:

There are also three graphic novel series, the first following historical time travel adventures like The Journey through Time series, the Reporter series, which adapts episodes of the animated series (more on that below), and a series retelling the original series in a Stylistic Suck Dog Man-esque art style (illustrated by Tom Angleberger of Origami Yoda fame). There is also a line of educational workbooks taking excerpts from various entries, and even a Comic-Book Adaptation.

The original book series has been adapted into an animated series as a joint venture by Italy, Canada and other countries; first aired in Italy (Italian) and Canada (English), and shown in several other countries shortly after. The show ran for 3 seasons. Despite being based on the books, the show is about 98% original material.

There are also two theatrical adaptations: the musical theatre adaptation of the Kingdom of Fantasy series that has toured in Spain, Denmark, Belgium, and Canada, and Oregon Children's Theatre's Gerimino Stilton: Mouse in Space, adaptation of the book of the same name.

The books and adaptions include examples of:

The Kingdom of Fantasy series