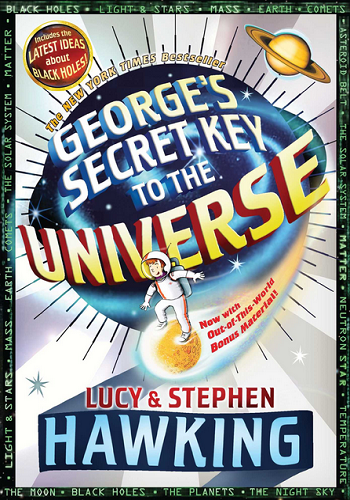 George's Secret Key to the Universe is a children's sci-fi book series written by Lucy Hawking with her father Stephen Hawking.
Advertisement:

George Greenby is a young boy who lives with eco-warrior parents Terence and Daisy. They abhor technology of any kind as they think it is destroying the world. George is never, ever allowed to go Next Door which was once the home of an old scientist but has now long been empty. Then one day, George's pet pig Freddy runs through the fence into Next Door. George disobeys his parents and follows his pig. He finds that Next Door is now inhabited by a scientist named Eric Bellis and his daughter Annie. They have a supercomputer called Cosmos which can make portals into any part of the universe. George and Annie use Cosmos to go on many space adventures and fight many mad scientists.

This series is distinctive for basing its storylines on real science. Things such as Schrödinger's Cat and Boltzmann Brains appear in this series.