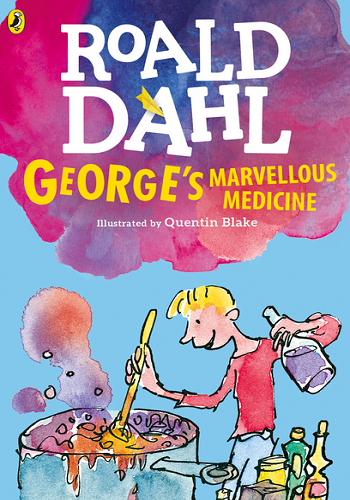 George's Marvellous Medicine is a 1981 children's book by Roald Dahl. George is a young boy left alone with his horrible grandmother. Responsible for giving her medicine, he decides to mix his own one using ingredients such as paint and animal pills, having no idea what the result will be.
Advertisement:

And far from poisoning her, it instead makes her grow incredibly tall. When his parents return to the farm and see that it has similar effects on the animals, his dad tries to get George to reproduce the formula. However, he cannot get it exactly right (to the misfortune of the chickens they test it on). The fourth and final batch turns out to be a shrinking medicine... which Grandma mistakes for tea and drinks a whole teacup full of. She then proceeds to shrink till she is invisible to the naked eye.