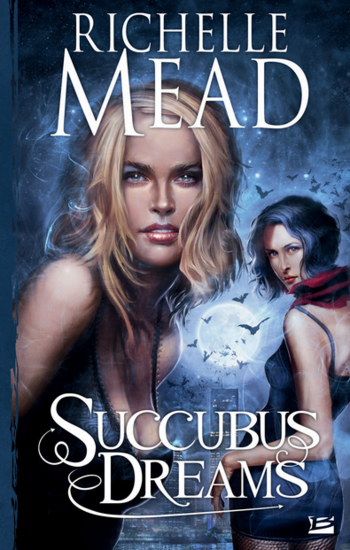 The Georgina Kincaid series (Succubus Blues, Succubus on Top (titled Succubus Nights in the UK), Succubus Dreams, Succubus Heat, Succubus Shadows, and Succubus Revealed), written by Richelle Mead, are about the titular succubus in Seattle and her satanic peers, who are just a small corner of the Diabolical Bureaucracy. A lesser immortal, Georgina Kincaid works in a bookstore where she falls in love with a mortal man, a famous author named Seth Mortensen. This is while she is trying to avoid tempting good mortals to Hell but instead just focusing on the already bad ones.
Advertisement:

The series chronicles her attempts to maintain her principles while finding herself, ironically, tempted to do things in order to be with her lover. The series is notable for having a comic tone and growing increasingly darker as the series goes on. It is also rather subversive with the forces of Hell being treated as a group of harmless bureaucrats.