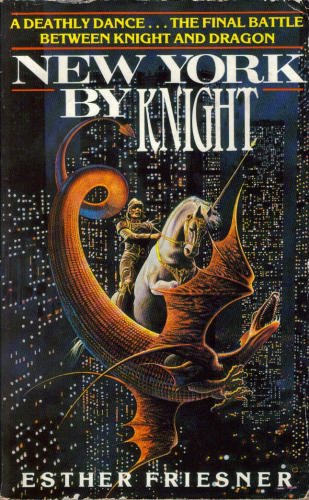 Instead of Standard Hero Reward, the knight gets paid in stock options.
"I saw a werewolf with a Chinese menu in his hand,
Walking through the streets of Soho in the rain,
He was looking for the place called Lee Ho Fook's
Gonna get a big dish of beef chow mein."
— Warren Zevon, "Werewolves of London"

Urban Fantasy, also sometimes called "Modern Fantasy", is a genre that combines common fantasy conventions with a modern setting.note  That is to say, a setting which is significantly more advanced than the Medieval European Fantasy popularized by Tolkien. Around the Enlightenment or Industrial Revolution is sometimes considered the absolute earliest an Urban Fantasy could take place, though it may depend on portrayal. The name "Urban Fantasy" is sometimes taken to imply that all works in the genre must take place in a large city, but this is not the case. Rather, the name implies throwing fantasy elements into more modern, urban societies (hence its secondary name). Still, it's very common for Urban Fantasy stories to take place in a large, well-known city, all the easier for their fantasy elements to hide themselves in.

As a genre, Urban Fantasy is sometimes seen as more accessible to the average reader than the Medieval European Fantasy due to the Like Reality Unless Noted nature of it, and the fact that modern settings are familiar to readers whereas the medieval era is something that modern readers may have trouble relating to. The exact cut off date for what falls under Urban Fantasy is fuzzy, as the works which most commonly get this label applied to them feature settings in the present day, but works taking place as far back as the Victorian Era are generally included. Works taking place more than ten to twenty years in the future however, are not.

Urban Fantasies almost always take place on Earth, rather than a Constructed World, or if not on Earth then in a place so close as to make little difference. Alternate History is common, incorporating Fantasy elements into real historical events, with humans living alongside magic, though if this isn't done there is usually a Masquerade, implying that witches, elves and fairies live along side us, just in hiding and probably forming a complete Wainscot Society. In such stories, The Unmasqued World is a common plotline. Another common convention used in Urban Fantasy is to suggest that at one point the world resembled a Medieval European Fantasy but The Magic Goes Away, and in the present The Magic Comes Back and now humans have to adjust to it.

Urban Fantasy often crosses paths with a number of genres, including Alternate History, Cosmic Horror Story, Dungeon Punk, Gothic Punk, Horror, Magical Realism, Paranormal Romance, Paranormal Investigation, Supernatural Fiction and Supernatural Thriller. Sometimes it's difficult to tell whether a work qualifies, but generally speaking Urban Fantasy is known for showing the impact of modern society on the fantasy elements included in it. Elves carry guns, witches use microwaves and Leprechauns work at the bank. It takes more than tossing in the odd vampire solely for the fear-factor to truly apply.

Gaslamp Fantasy, Supernatural Soap Opera and Historical Fantasy are notable sub genres. Urban Fantasy is itself a subgenre of Speculative Fiction, specifically Fantasy. Many works that throw mystery-genre elements into the mix also rate as Fantastic Noir. Most of the Vampire Fiction published in recent times falls under this genre, whereas in the past it followed the conventions of Horror. Urban Fantasy is often considered the fantasy equivalent of 20 Minutes into the Future.

If you want to see a list of common tropes of this genre, see Urban Fantasy Tropes.