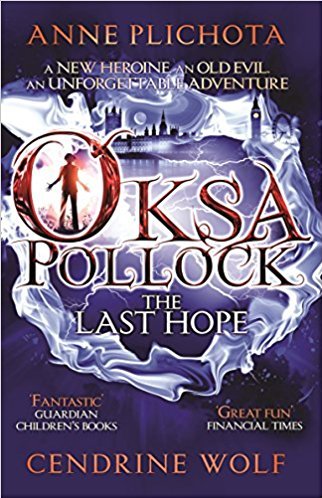 The english cover of the first book
Oksa Pollock is an French Urban Fantasy series written by Anne Plichota and Cendrine Wolf. It was translated into German and English.
Advertisement:

It follows the story of the thirteen year old Oksa Pollock who moved from Paris to London with her family. There she learns the secret of her family:

They once lived in an magical world called Edefia which was ruled by Oksas great-grandmother. After some bad decisions of her, a few people tried to take over Edefia and Oksas grandmother had to flee with some friends (but without her mother) to our world. Now Oksa is the only hope for her family (and also other people from Edefia who aren't related to her) to get back to Edefia.

The series has six volumes:

The first four volumes were already released in English by Pushkin Press:

It is planned to make a movie out of the series.