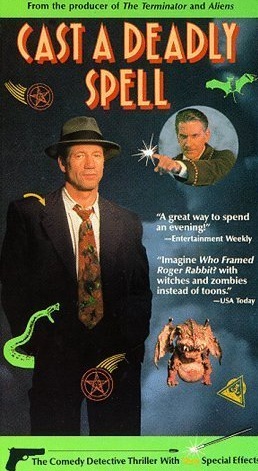 If your eyes look upon it, you will surely go mad!
Advertisement:

Cast a Deadly Spell is a 1991 horror/noir movie made for HBO. It was directed by Martin Campbell and written by Joseph Dougherty.

It's 1948. The plot follows Hardboiled Detective Harry Phillip Lovecraft (Fred Ward), in a fictional universe where magic is real, monsters and mythical beasts stalk the back alleys, zombies are used as cheap labor, and everyone, except Lovecraft, uses magic every day. Yet, cars, telephones and other modern technology also exist in this world. There's some implication that magic only recently gained widespread use for whatever reason. Lovecraft is hired to recover the Necronomicon, stolen by persons unknown — although their motives probably aren't: the book contains the rituals needed to awaken and summon the Outer Gods. Complicating Lovecraft's investigation is his former partner Harry Bordon (Clancy Brown), now a crime boss, who is also looking for the book.

A sequel, Witch Hunt, was released by HBO in 1994; Dennis Hopper replaced Fred Ward as Lovecraft. It more directly parodies the 1950s Red Scare with a counter-revolution against magic use.

Cast a Deadly Spell provides examples of the following tropes: