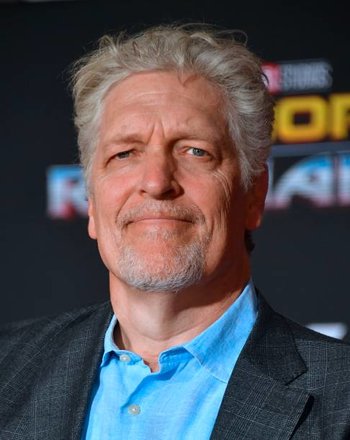 There can be only one man with the secret formula of the Krabby Patty.
Advertisement:

Clarence John "Clancy" Brown III (born January 5, 1959 in Urbana, Ohio) is an American screen and voice actor from Ohio. He is the go-to guy when you need a tough guy, Jerkass, or a Magnificent Bastard.

Brown's distinctive and versatile voice has given him a luxurious voice acting career, although you can still see him in a variety of smaller roles in live-action movies and television. Despite his reputation for playing The Heavy, Brown's coworkers have often cited him as the warmest, most kind-hearted, most sensitive guy on the planet.