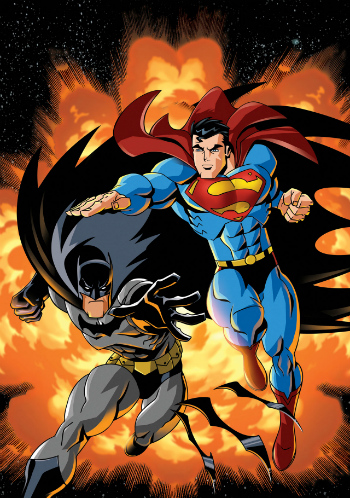 Next Sunday A.D., a recession leads to Lex Luthor becoming President of the United States. Seemingly solving the financial crisis with a wave of his hand, he declares the curbing of vigilantes the main focus of his Presidency, even forming a government Super Team. Understandably, Superman is pissed.

Soon, it's discovered that a Kryptonite meteor the size of a small country is headed towards Earth and will impact in seven days. While President Luthor tries fighting it off with rockets, Batman slyly hints he's "working on something with one of his contacts". Luthor proposes to meet with Superman to discuss the threat; it turns out to be an ambush where Secret Service Agent John Corben (Metallo) lays the smackdown on the Man of Steel until Batman bails him out. In the aftermath of the ambush, however, Metallo is found murdered. Luthor frames Superman, citing mental imbalance due to the meteor, and places a bounty on his head.

Cue an entire movie's worth of Superman and Batman going up against pretty much the entire DCU. Along the way they pick up a grand total of two allies: Power Girl and Japanese 13-year-old genius the Toyman. Things change quite a bit as the film progresses, however. A sub-plot deals with Luthor having a Villainous Breakdown as panic spreads, his anti-meteor tactics fail and his Presidency goes south.

A sequel, Superman/Batman: Apocalypse, was released in 2010.