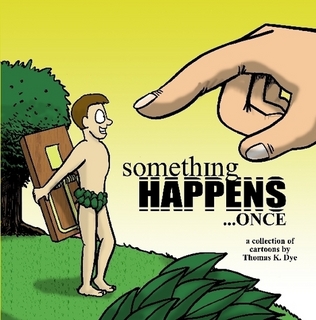 is a weekly Web Comic in the vein of The Far Side, created by Thomas K. Dye of Newshounds. With the exception of Guest Strips (by Tim Tylor, among others) when Dye has needed to take hiatus, there is almost no continuity between individual strips, allowing for maximum absurdity potential.

, Dye took an extended hiatus from Something Happens to focus on a personal project

. He returned on August 4th of that year, but then ended the comic for good on January 1st, 2012.

...and we all know what that means! That's right, it means we (and by "we" we mean "you") will have to save an archive of it and upload the file on archive.org

. You know, before the site goes kaput! Unless, of course, you don't edit this wiki, in which case this whole paragraph does not concern you and we urge you to just carry on doing what you're doing and pretend you didn't read this.

This Web Comic provides examples of: