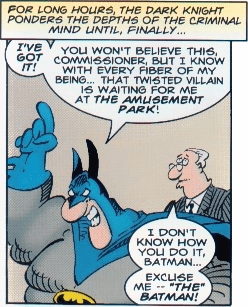 Batman: Pretty fishy what happened to me on that ladder.
Gordon: You mean, where there's a fish, there could be a Penguin.
Robin: But wait! It happened at sea! See? "C" for Catwoman!
Batman: Yet — that exploding shark was pulling my leg!
Gordon: The Joker!
O'Hara: It all adds up to a sinister riddle...Riddle-er. Riddler?
— Batman: The Movie
Advertisement:

This is when a character makes a huge jump to reach a conclusion, often through a mental Wiki Walk, that has to be made in order for the plot to progress, but without any real explanation for what might have spurred the conclusion.

Often used in cases where the viewers already know that everything's connected and how they connect, but there's no in-story explanation, and the plot really needs to get to the next part. There's also the matter that since most authors are not themselves genius detectives, in many cases they have trouble thinking of a good way for the character to figure out connections that the author has already decided will exist.

Detective novelist Ronald A. Knox discouraged the use of this in his rules for a Fair-Play Whodunnit.

The Trope Namer is Batman, specifically the '60s Adam West Batman, who, given his title as the World's Greatest Detective, can easily fall into this when a writer gets into a rut (or is playing it up for laughs). Can also be interpreted as "batshit crazy deduction."

Also see Only the Author Can Save Them Now. This is a natural result of having Super Intelligence. Epileptic Trees are fan theories that look like this, and the Conspiracy Theorist is frequently someone who thinks they have pulled off the equivalent of a Bat Deduction that proves their beliefs. Gambit Roulette is the plan equivalent.

Even better is the fact that he ignores the more obvious deduction, the Fountain of Neptune, also in Rome.

Anthony deduces that Ian is turning into a zombie.

Anthony deduces that Ian is turning into a zombie.