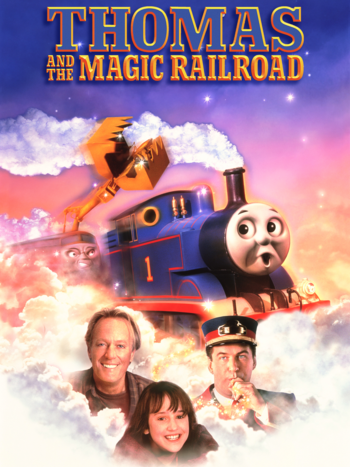 Thomas and the Magic Railroad is a 2000 film based on the Thomas & Friends series and the American spinoff Shining Time Station.

An evil diesel locomotive named Diesel 10 (voiced by Neil Crone) has arrived on the Island of Sodor, with his goal of destroying the steam locomotives. He plans to locate a magical lost engine and destroy her in order to remove the magic from the Island. Mr. Conductor (Alec Baldwin) is left in charge of the railway while Sir Topham Hatt is on holiday, but his mysterious gold dust that allows him to magically transport from place to place is critically low, and without it there will be no way for anyone to travel to Sodor. Thomas the Tank Engine (voiced by Eddie Glen) along with the other engines help Mr. Conductor find more gold dust. Joining along the quest are Mr. Conductor's slacker cousin named Junior (Michael E. Rodgers), a young girl named Lily (Mara Wilson), and her grandfather, Burnett Stone (Peter Fonda), who has hidden the secret engine all these years and couldn't get her running.

The film was released in theaters on July 14th, 2000 in the United Kingdom and July 26th, 2000 in the United States. However it was a Box Office Bomb, only making 19.7 million worldwide against a 19 million budget. The film's critical and financial failure would cause Destination Pictures to shut down shortly afterwards and would later cause Britt Allcroft to distance herself from the franchise and sell her company, Gullane Entertainment (and along with it, the rights to Thomas & Friends), to Hit Entertainment just a couple of years after its release.

Perhaps the most infamous aspect of the film however isn't what made it in, but what didn't make it in, as the film has became notorious in the years following its release for its hugely Troubled Production and the large wrath of content that was scrapped last minute, most notoriously an entire Big Bad in the form of P.T. Boomer, who was cut so late that scenes featuring him were shot and glimpses of him are still present in the final film. This has led fans to demand for a directors cut for the film. While a directors cut was never releasednote however, a workprint cut did get leaked onto the internet in 2020, Shout Entertainment would compile many of the film's deleted scenes and release them on a blu-ray release of the film in 2020, leading fans to finally get a glimpse of the magic railroad that never was. This subsequently lead to fan-made reconstructions of the original vision.

Although the film remains Thomas & Friends' only theatrical film (later films would be Direct to Video), Hit Entertainment did try to attempt another theatrical film based off of Thomas in the early 2010s with Shane Acker (who directed 9) attached to direct the film, only for it to end up in Development Hell and eventually get cancelled a couple of years after its announcement.

On October 2020, two decades after the film's release, Mattel (current owners of the brand) have announced another attempt at a new theatrical film featuring Thomas, this time with Marc Forster (of World War Z fame) attached to direct the film. It remains to be seen if the film actually comes to fruition.