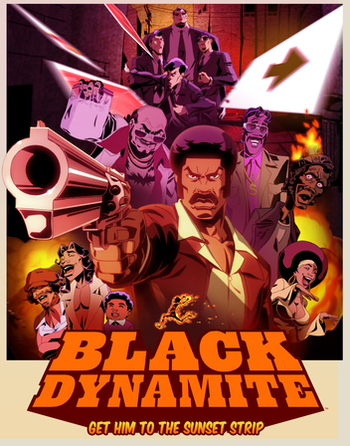 Black Dynamite is an 2012 Animated Adaptation of the 2009 movie Black Dynamite, which was an Affectionate Parody of Blaxploitation films, on Adult Swim.

The series does not follow the same Stylistic Suck of the movie. Instead it ratchets up the silliness by mixing in supernatural, extraterrestrial, and just whacked out nonsense to its plots, largely derived from 1970s black pop culture. And plenty of Lampshade Hanging as Black Dynamite and his crew take on any threats that seek to put the black man down.

As Bullhorn would say: "This is the cartoon of the film that we love, and it provides tropes and examples there-of:"

Example of:
Freudian Excuse Is No Excuse