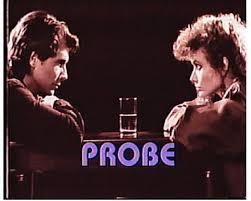 "What the hell kind of place is this?"
— Mickey
Advertisement:

Austin James (Parker Stevenson) is a reclusive genius and President of Serendip, a high-tech consulting firm he founded. However, he's too irritated by average people to come up with solutions for them and instead conducts random experiments in his warehouse full of devices (most of which he appears to have designed on his own) For Science!

Michelle Castle (Ashley Crow), also known as Mickey, is his Beleaguered Assistant. Serendip hired her to be Austin's secretary and uses her to get Austin involved in things outside of his warehouse, like his job. Conventionally intelligent, she's the latest in a line of secretaries sent to Austin by the CEO of Serendip.

Together, these two encounter out-of-control experiments, supernatural events, and mysterious deaths. As you might expect, Probe features heavy doses of scientific knowledge and logical reasoning, but was cut short due to the 1988 writer's strike.

Not to be confused with the direct-to-video BBV Productions film series P.R.O.B.E., based on Doctor Who in 1994.