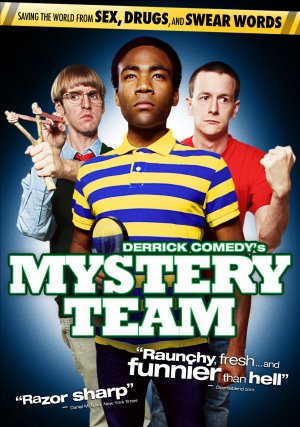 "This is real detective stuff!"
"YOU'RE NOT A REAL DETECTIVE!!"
Advertisement:

When they were seven years old, the Mystery Team

were three kids living in the same neighborhood in Oakdale who played at being precocious pre-teen detectives. With Jason (Donald Glover) as "the Master of Disguise," Duncan (DC Pierson) as "the Boy Genius" and Charlie (Dominic Dierkes) as "the Strongest Kid in Town," they would spend their afternoons getting to the bottom of such crimes as missing tricycles and stolen pies, charging ten cents (or fruit roll-ups) for their services.

However, while their peers have moved on to more mature pastimes now that they're eighteen years old, Jason, Duncan and Charlie are hopeless nerds stuck in pre-adolescence as they prepare to graduate from high school. Convinced all they need to do is prove their crime-busting talents to regain the respect of their peers, the Mystery Team step into a new class of detective work when a little girl asks them to find out who killed her parents.

The guys are up for the challenge, but it isn't long before dealing with real (and truly dangerous) criminals gets them in hot water...

Created and produced by members of the Derrick Comedy troupe, Mystery Team received its world premiere at the 2009 Sundance Film Festival.