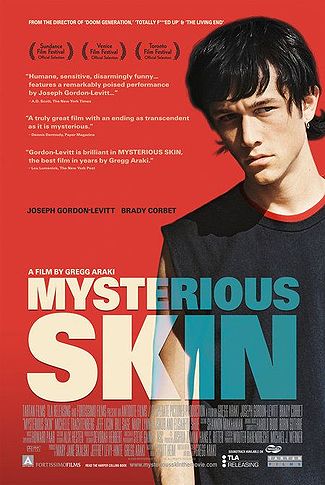 Mysterious Skin is a 2005 drama film (though produced in 2004) directed by Gregg Araki, who specializes in avant-garde films about homosexual relationships. It is based on the novel of the same name by Scott Heim.

At eight years of age, Neil McCormick (portrayed by Chase Ellison as a boy and Joseph Gordon-Levitt as a teen) discovers he is homosexual, developing an obsession with his mother's boyfriends and the men in her Playgirl magazines. He develops a crush on his baseball coach (Bill Sage), who takes advantage of this and starts taking special interest in him. One stormy night, an incident happens...

Several years later, a teenage Neil works as a gay hustler. Meanwhile, another young man named Brian Lackey (George Webster as a boy and Brady Corbet as a teen) who is obsessed with alien abduction conspiracy theories is trying to piece together his past. He cannot remember the events of several hours in his youth, and he assumes that during this time, aliens had abducted him.

The two eventually meet, and the horrible, liberating truth about what happened in their childhood is revealed.

While the film was critically acclaimed, it was extremely controversial for its subject matter. Moral Guardians in Australia attempted to have it banned, on the grounds that it could encourage copycat behavior. However, to the filmmakers' credit, the child actors' welfare was very thoroughly looked after by means of separate scripts and being asked to perform innocent motions that would be edited to take on a more suggestive appearance.