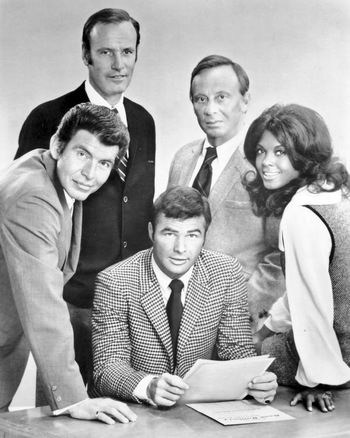 Dan August is a short-lived Police Procedural that ran on ABC during the 1970-71 TV season.

Produced by Quinn Martin Productions, the series came out of Martin's first TV movie, The House on Greenapple Road, which was based on a novel by Harold Daniels entitled The Red Door Murder. The movie centered on Lt. Dan August (played by Christopher George, who, in the original novel, was named Dan Nalon), a homicide detective for the police force of the fictional California town of Santa Anita, investigating the disappearance and possible murder of a housewife (Janet Leigh). Dan's partner was Sgt. Charlie Wilentz (Keenan Wynn), and their boss was Police Chief George Untermeyer (Barry Sullivan). Rounding out the cast were Sgt. Joe Rivera (Ned Romero) and Katy Grant (Ena Hartman), the Chief's secretary. Tim O'Connor played Leigh's husband, a known wife-beater who was the prime suspect, and Martin cast a number of other familiar faces in the movie, including Julie Harris and Walter Pidgeon (both of whom weren't doing much in the way of television at the time), and many of the 'QM Players', like William Windom, Mark Richman, Burr DeBenning and Lynda Day George.

Martin wanted Christopher George to star in the series, but George had to decline, as he'd already committed to another series for that season, The Immortal. Chris made a suggestion to the producer... hire Burt Reynolds! He showed the producer some episodes of Reynolds' earlier cop series, Hawk, which led Martin to cast the rugged actor in the new series. Additionally, the other two main roles were recast: Sgt. Wilentz would now be played by Norman Fell, and Richard Anderson took over the role of Chief Untermeyer. Ned Romero and Ena Hartman were the only holdovers from the movie.

For such a small town, Santa Anita could easily be the murder capital of California, as there was always a brutal murder for Dan and the others to solve. And since it was a small town, it was very likely that Dan knew at least one person involved in the case, be it a victim or a suspect. Conversely, a lot of folks knew Dan — he'd been a college football star prior to joining the police force. Many times, Dan would subdue a suspect using a football tackle.

The series only lasted for one season and was destined to be forgotten, when all of a sudden, Burt became a superstar with the one-two punch of the hit movie Deliverance and a nude centerfold in Cosmopolitan magazine. CBS, sensing an opportunity, bought the rights to the series and ran it during the Summer of 1973, to huge ratings. Two years later, they ran it again, and with Reynolds now the top box-office draw in the country, the ratings were huge once again. A few years later, the Samuel Goldwyn Company acquired the rights to Dan August and spliced together several episodes to make TV-movies out of the series (Richard Anderson was brought in to shoot connecting footage). For a number of years, this was the only way to see any episodes of the series, until GetTV obtained the rights a couple of years ago. Additionally, VEI Entertainment released a DVD set containing the pilot film and all 26 episodes.

Ena Hartman is the only surviving cast member from the series. Norman Fell passed away in 1997, Ned Romero and Richard Anderson in 2017 and Burt Reynolds in 2018.