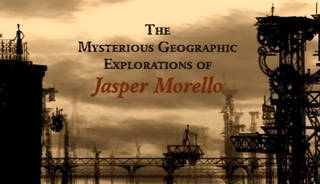 The Mysterious Geographic Explorations Of Jasper Morello is a series of Australian animated short films directed by Anthony Lucas, notable for their unique CGI cut-out animation style which shows almost everything in silhouette. The first film, Jasper Morello And The Lost Airship, was released in 2005 and nominated for an Academy Award, while several more are planned.