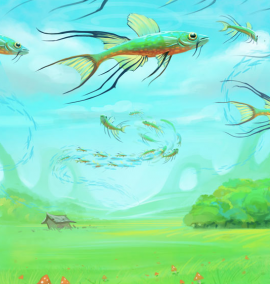 "Fly, my pretties! Fly! Fly!"
"Isn't she from Jugpot? I didn't know she could fly."
— Hewpoe, Klonoa (Wii)
Advertisement:

You know what fish are — those scaly finned things with the big fin for a tail that live in various bodies of water... except for these things, which forget that last part.

For some reason, in fiction — especially Video Games — one can encounter fish that float in the air. Given sufficient animation, in fact, they will clearly be swimming through the air. These creatures are typically found on beaches and around waist-deep water — but not always. The next most common habitat for the Flying Seafood Special is the desert.

Rays seem particularly popular, probably due to already having wings. But it doesn't have to be fish; you can have Flying Electric Jellyfish, Flying Giant Squid, Air Whales...

As for what the reasons might be for such beings to exist, two stand out as primary — it allows the characters to interact with them (typically by fighting them) by the path of least Willing Suspension of Disbelief, or alternately it works as a touch of surreality.

This also happens in nearly every Mons series ever. OK, now since there are more aquatic creatures than any other kind on Earth, obviously you're going to have to throw in some Mons based on fish somewhere. Except the problem is, 90% of your game takes place on the land (because Atlantis Is Boring). Hrm. Well, just have them act like they're swimming through the air. Not Quite Flight, just hovering ever so slightly over the ground at all times. Problem solved! Nobody would question that!

Related to If It Swims, It Flies and The Sky Is an Ocean. Compare Space Whale, Terrestrial Sea Life, and Living Gasbag. Not to be confused with Shamu Fu. Can be a type of Airborne Mook. Fish People are similarly air-dwelling sea-creatures (and if their culture has a Horse of a Different Color, expect it to be something like this — most likely a seahorse).