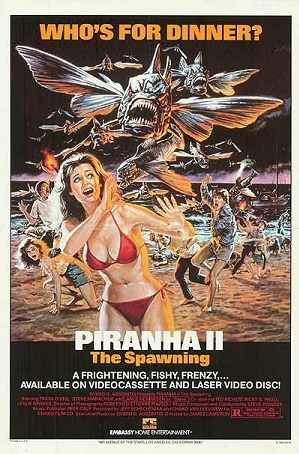 A 1981 sequel to Piranha directed by James Cameron, which is in his words "the finest flying piranha movie ever made" and starring Lance Henriksen.

A batch of experimental piranhas made by the army have escaped their containment and started attacking the tourists of a local Jamaican island.

Midway through the filming, the director (or at least the credited one) had a nightmare; the result of that nightmare was The Terminator. note Or so he claims, Harlan Ellison has a different opinion of where the idea for it came from.

If you're looking for the sequel to the first film's remake, see Piranha 3DD.