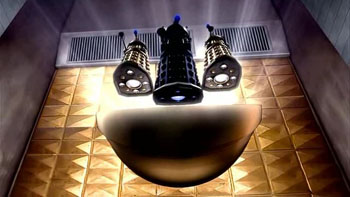 "That's not Cybermen..."
Rose: Doctor, they've got guns.
The Doctor: And I haven't. Which makes me the better person, don't you think? They can shoot me dead, but the moral high ground is mine.
Advertisement:

The one with a Bazoolium and Martha Jones' cousin.

The episode begins with a voice-over of Rose recounting that nothing happened the first nineteen years of her life, but that it changed when she met the Doctor, with whom she thought she'd travel forever. She then talks about ghosts, Torchwood and the war, and says that the story she is telling is of how she died.

The TARDIS shows up in a park near Jackie's flat so that Rose can visit her mother and do some laundry (apparently the TARDIS lacks a washing machine). Jackie greets them and asks if they want to stay and see her visiting father, which confuses and concerns Rose, as her grandfather died when she was ten. An insubstantial grey "ghost" appears and Jackie introduces it to Rose and the Doctor. The concerned Doctor finds out from watching television that this has been going on for months all over the world, and with Rose and an unwilling Jackie in tow quickly traces the source of the "ghosts" to a building that houses the Torchwood Institute, a secret British government organization with a mandate of protecting the United Kingdom and Earth at any cost (originally conceived by Queen Victoria after her encounter with the Doctor in 1879).

It is Torchwood who are causing the "ghost shifts" as they try to tap into a source of extra-dimensional energy. They also show the Doctor a mysterious globe that he informs them is a "Void ship", a craft designed to travel the non-existent space between parallel universes. The Doctor tells the head of Torchwood, Yvonne Hartman, that the Void ship's entry into Earth's dimension damaged the barrier between universes, and that each time they activate a ghost shift, they are damaging it further, which will eventually cause the barrier to collapse. She reluctantly agrees to delay the next ghost shift, but several technicians have been taken over by Cybermen from the parallel universe of "Rise of the Cybermen"/"The Age of Steel", and activate it anyway.

This brings some 5,000,000 Cybermen across the dimensional gap all over the world, even inside Torchwood, where they begin changing the operatives, including Yvonne, into Cybermen. In the Void ship room Rose meets Mickey, who has also crossed between universes, and they watch as the sphere begins to open. Mickey tells Rose that the Cybermen left their original universe some time ago, then hoists a weapon designed to kill them, only to stare in disbelief with Rose as four Daleks emerge from the Void ship.