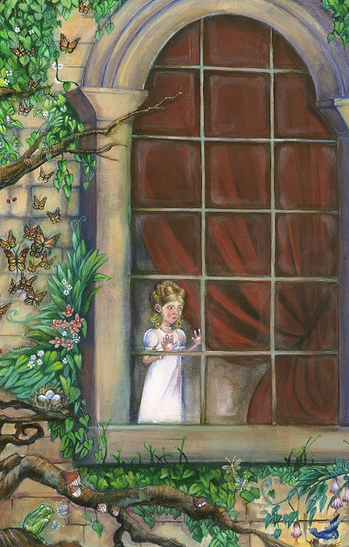 The finest home on earth is still a prison if you can't leave.
Image

. Used with permission.
"Well, I admit my crib is pretty sweet. But a gold cage is still a cage, Harry."
— Bob, The Dresden Files
Advertisement:

It's a beautiful place, where the character's every need is provided in abundance. Their every whim is immediately fulfilled by a Maid Corps. The resident of such a paradisiac place can do anything they want.....except leave. See, they are not really a resident but a prisoner and the Maid Corps are the security guards, in addition to the genuine security guards. There is absolutely no leaving this place for any reason, with plenty of carrots and sticks to make sure no one wants to either.

It may be used by an Affably Evil villain who has to detain someone for their Evil Plan and wants to be hospitable about it. Maybe they have a Villainous Crush on someone and this is part of their attempts to win them over, or at least keep them from getting too angry about being kidnapped in the first place. It is also likely where the villain's guests will remain when not at dinner.

Frequently overlaps with Caged Bird Metaphor, when a character's situation is compared to that of a caged bird.

Inverse of the Luxury Prison Suite, which is a literal prison turned into a nice place. Compare Lotus-Eater Machine, which also a scenario designed to keep prisoners in place through contentment, as well as Possessive Paradise, where the place itself doesn't want you to leave.

It is often used as An Aesop about why one should prefer Liberty Over Prosperity. If the character finally manages to escape, expect them to struggle with the simplest tasks due to having been sheltered from the hardships of the outside world.