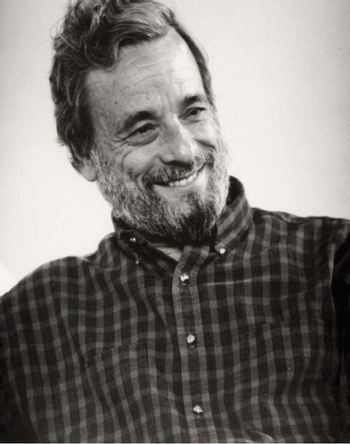 "Audience enters into the brand new underground Henry Miller Theater, soon to-be-christened the STEPHEN SONDHEIM THEATER. It is under-attended, more modern than you're comfortable with, and requires you to travel deeper down than you think you ought to.

Stephen Sondheim (March 22, 1930 – November 26, 2021) was one of the 20th Century's most respected composers and lyricists of musicals. He won seven Tony Awards, an Academy Award, eight Grammy Awards, and the Pulitzer Prize.

Having the benefit of being mentored by the legendary Oscar Hammerstein, Sondheim began on Broadway as a lyricist and then began writing his own music. Critics of his work complain that the songs are too complex and unhummable, something that he went on to lampshade in such works as Merrily We Roll Along and Sunday in the Park with George.

Sondheim also appears as a character in the musical tick, tick... BOOM! (which was a tribute to him by admirer Jonathan Larson) and its film adaptation, where he's played by Bradley Whitford. The latter contains a Voice-Only Cameo of him and was released one week before his passing.

Sondheim also composed the movie scores for three films: Warren Beatty's Reds, Alain Resnais' Stavisky, and Tim Burton's 2007 film version of Sweeney Todd. His collected lyrics (with his comments and recollections) have been published in two volumes: Finishing the Hat and Look, I Made a Hat.

Tropes used frequently in works by Stephen Sondheim include:

Works by Stephen Sondheim without their own pages provide examples of: