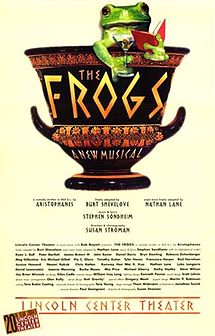 The world is in a bit of a mess. The art of good theater and literature in general has gone downhill, and things seem to be going to pieces. The Greek god Dionysus decides that he won't stand for this nonsense, and sets off with his Deadpan Snarker slave Xanthias to bring George Bernard Shaw back from Hades to set things back on track. What follows is a hilarious journey as the pair try to break into the Underworld, are beset by singing frogs in Hades (the creatures hate change and want things to stay the way they are), and finally must decide if Shaw really is the best playwright to bring back to life.

An adaptation of a play by Aristophanes, this musical was created for a college performance at Yale in 1974. Written by Burt Shevelove with music and lyrics by Stephen Sondheim, it was based on an adaptation that Shevelove had written and directed during his own senior year at Yale in 1941. It was staged in the college gymnasium, with the scenes involving the River Styx and the frogs being performed in the pool, with the Yale swimming team (hence lines in the original opening song, begging the audience not to swim during the performance). In 2004, Nathan Lane expanded the show into a full-length musical, writing the new book himself (Shevelove having passed away in 1982) with Sondheim contributing seven new songs. This expanded version played on Broadway with Lane and Roger Bart as the leads.