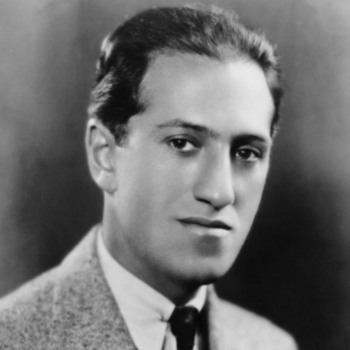 "I like to think of music as an emotional science."
Advertisement:

George Jacob Gershwin (September 26, 1898 – July 11, 1937) was an American composer of both jazz and classical music remembered mainly for creating Rhapsody In Blue, best known nowadays as the theme song of United Airlines. He's also known for the opera Porgy and Bess, source of such famous songs as "Summertime" and "It Ain't Necessarily So," and for writing many other songs that have become standards, usually with his brother Ira Gershwin as his lyricist. The Gershwins' biggest Broadway hit was the Pulitzer Prize-winning play Of Thee I Sing.

His estate was known for its aggressive advocacy of extending copyright protections, as many of his popular works, including Rhapsody in Blue, were composed in the mid-1920s and were always on the cusp of falling out of copyright protection prior to the terms being extended. In 2020, the Rhapsody, composed in 1924, finally entered the public domain. Porgy and Bess will follow in 2031, and his entire catalogue by 2033.