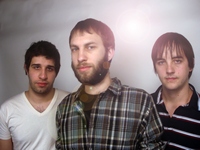 Genghis Tron are a three-piece Extreme Metal band generally described as cybergrind, with many elements of other genres that are best described in the example section. They formed in 2004 and come from Poughkeepsie, New York, though they would later be based in Brooklyn and San Francisco, California. Between 2010 and 2020, Genghis Tron were on hiatus. They reformed in 2020 with a major lineup change. The third album Dream Weapon was released in March 2021 and saw the band ditch their signature cybergrind sound for a more electronic and psychedelic tinged style of Progressive Metal.