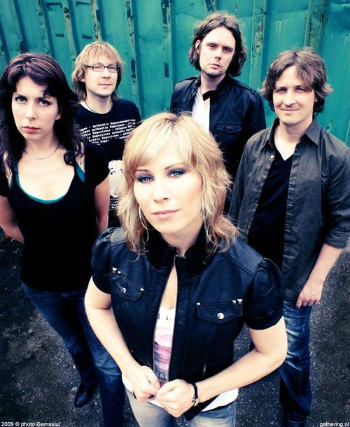 The Gathering circa. 2009
Advertisement:

The Gathering began life as a doom death band in 1989, centered around the brothers Rutten (Hans, drummer and René, guitar) and original singer Bart Smits. Along with keyboardist Frank Boeijen and bass player Hugo Prinsen Geerligs, the band would release their debut Always... to a small amount of success in 1992. A year later there would be a change of singer to Niels Duffhues, and the band would release the less well recieved Almost a Dance. Shortly after, Niels Duffhues would also leave.

It wasn't until 1995 and the arrival of Anneke van Giersbergen that The Gathering would find their sound and much larger success. The band's third album, Mandylion, saw the band ditch their death metal past for a slow, atmospheric gothic sound, accompanied by Anneke's signature vocal style. The album was a hit in Europe, selling over 130,000 copies and producing a charting single in Strange Machines. This would be one of the earliest successes in the female-fronted gothic metal genre, paving the way for other Dutch bands such as Within Temptation, After Forever and Epica. The similar follow-up, Nighttime Birds, would also prove successful.

The Gathering would develop their sound further over the next four albums, gradually moving away from goth metal (and metal in general). The band's fifth album, the double-CD How to Measure a Planet? would see the band experiment with new styles, especially shoegaze and trip-hop, creating an album rather different from Mandylion, let alone the band's earlier material. if_then_else and Souvenirs would follow, before Hugo would take his leave, with a live acoustic album Sleeping Buildings being his last recording. He would be replaced by Marjolein Kooijman, who would debut on Home in 2006.

In 2007 Anneke decided to leave the band, wishing to spend more time with her young family. She formed the solo band Agua de Annique, which includes her husband Rob Snijders. They released three studio albums (one of which is mostly covers), as well as a live album. In 2011 she changed the name to "Anneke van Giersbergen" after signing a record deal as a solo artist, releasing two more albums under her own name. She is currently the frontwoman for the band VUUR. Her solo work is considered to be soft Alternative Rock while VUUR is more Progressive Metal.

Meanwhile, the remaining members of The Gathering returned in 2009 with a new singer, Norwegian Silje Wergeland, formally of Octavia Sperati. In contrast to the radical style change from the band's first two singers and Anneke, Silje has a relatively similar style. Later, the band would release their first album since Anneke's departure, The West Pole. The album would not only feature songs with Silje Wergeland, but also guest lead vocals from Anne van den Hoogen, and Stream of Passion's Marcela Bovio.

In 2011, The Gathering released an online single, the almost 11 minute long Heroes for Ghosts.

(not to be confused with a horror/fantasy novel or a popular card game. However, their name does come from Highlander.)

The Gathering provides examples of the following tropes: