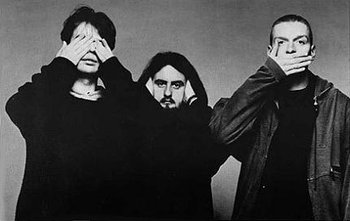 Godflesh is a band from Birmingham, England, one of the Trope Codifiers of Industrial Metal and an influence on many other bands, including Isis, Faith No More, Converge, Korn, Ministry, and Fear Factory. The band's core line-up generally consists of vocalist / guitarist Justin Broadrick and bassist GC Green; the band usually uses a drum machine, though they have also used real drummers in their music.

The band's original incarnation was formed in 1982, under the name Fall of Because, by Green and guitarist Paul Neville. Justin Broadrick, who had played guitar in the legendary Grindcore outfit Napalm Death, joined the group as vocalist and drummer in 1985; two years later, the band fell apart. In 1988, Broadrick contacted Green and they reformed Fall of Because, Broadrick taking up the position of guitarist and deciding to use a drum machine. The band also changed its name to Godflesh. Throughout their career, Godflesh was known for its crushing guitar riffs, plodding bass, robotic percussion, and Broadricks's Harsh Vocals and minimalistic lyrics.

In 2001, Green left the band. During this time, Broadrick's relationship with his girlfriend had dissolved, and Broadrick suffered a nervous breakdown; he disbanded Godflesh in 2002.

As stated above, the primary line-up of the band consists of Broadrick and Green; however, they have had other, temporary members. These include:

Broadrick is also the man behind the post-metal band Jesu and the dark ambient project Final.