Music / The Get Up Kids 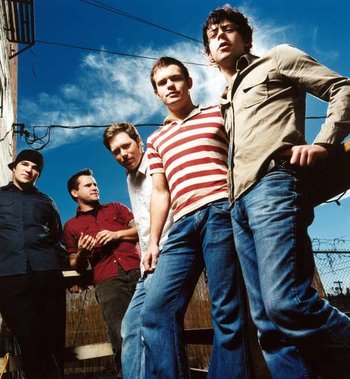 The Get Up Kids are an Alternative Rock band from Kansas City, Missouri. They are largely considered the Trope Codifier for late-90s-early "second wave" emo music, with personal, often intimate lyrics and a distinctly Pop Punk sound. The band has toured under a fairly consistent membership since reuniting in 2008, and have put out six studio albums. Vocalist Matt Pryor is the band's most significant contributor musically, and James Dewees, who later became My Chemical Romance's keyboardist, made a side project, Reggie And The Full Effect, that was originally songs that the rest of the band found inappropriate or unfit for The Get Up Kids.

The band had a major impact on later Pop Punk and emo musicians. Pete Wentz has said that without their debut, Four Minute Mile, Fall Out Boy would have never been a thing, and Tom Delonge of blink-182 has cited their second album as influential.

Tropes describing The Get Up Kids' music: